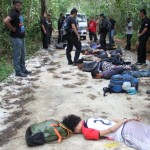 The suspects are believed to be planning to cause civil unrest in the country. They had planned to launch attacks in Malaysia on April 25 and April 26.