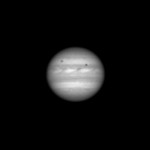 LORRI’s first Jupiter image is all we could have expected. We see belts, zones and large storms in Jupiter’s atmosphere. We see the Jovian moons Io and Europa, as well as the shadows they cast on Jupiter. It is most gratifying to detect these moons against the glare from Jupiter.