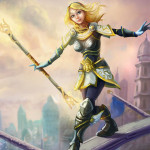 The Lady of Luminosity is released in patch version 1.0.0.103 along with the Spellthief and Sorceress Lux skins. Her abilities include Light Binding, Prismatic Barrier, Lucent Singularity, and Finales Funkeln, which damages all enemy units in front of her. Designer:

If Swain was a bit dark for your taste, then this next champion ought to be more your speed. She’ll be a real ray of light into your otherwise dreary day. Allow me to introduce Lux, the Lady of Luminosity. Representing the City-state of Demacia, Lux is not only the latest champion to grace the Field of Justice, but also the sister of everyone’s favorite Might of Demacia, Garen. Whether you’re a strong believer in sibling rivalry or just want to keep it in the family, Lux should make the perfect addition to your champion collection.