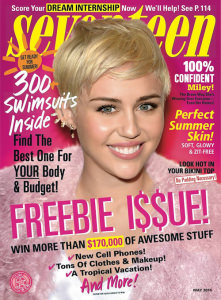 [Miley is] very, very selective when it comes to magazine covers. Miley declined Seventeen and denied being a part of it, completely. But Seventeen still pushed for Cyrus and, with or without her consent, will be rolling issues of her onto newsstands everywhere. Because of Cyrus’ unwillingness to participate, the May edition will include stock photos of her as well as a write-around inside its pages — none of which were approved by Cyrus’ team.