Buhari swears in a new set of military chiefs in Abuja, ordering them to end Boko Haram’s Islamist insurgency within three months.

You need to brace up and continue to team up with other stakeholders to come up with a well co-ordinated joint effort which will bring a desired end to these insurgencies within three months. The activities of these misguided groups and individuals have resulted in wanton destruction of lives and properties of our citizens and a disruption of social economic lives of millions of Nigerians.

The president urges the armed forces to conform with international law.

In particular you must protect innocent civilians and respect the rights of combatants.

The House of Representatives urges Buhari to establish a North East Development Commission, for the rehabilitation and reconstruction of the insurgency ravaged part of Nigeria. The House Speaker notes that the terrorist activities of Boko Haram, have devastated the North-East region and resulted in the deaths of thousands of people, displacement of about five million people, and disruption of education as well as other social and economic activities. The proposed  commission shall be backed with robust financial mechanisms which shall include a percentage of reserve funds, special contribution by companies, donor agencies, international NGOs, development partners and other funding option. The lawmakers urged Buhari to convene an international donor conference or summit ‘as soon as possible’. The lawmakers also ask for a North East Highway, agricultural projects, and the rebuilding of schools, to fast track the zone’s development.

After his four-person bipartisan delegation meets with Buhari and military service chiefs, Issa says the U.S. is ready to provide military training to help Nigeria’s battle against Islamic extremists. He says Nigeria’s military is not outgunned by Boko Haram and needs training, not arms, to defeat the insurgents. This contradicts Buhari, who says that the United States is aiding Boko Haram by refusing to sell attack helicopters to Nigeria. Issa:

The number one thing we bring is professional training to help the Nigerian forces fight Boko Haram and to advise them how to treat insurgents and civilians captured in the war zone. [Nigeria’s military] doesn’t lack basic firearms … it lacks training in military strategy and in international and humanitarian laws. This is a military that was allowed to fall into disrepair during the previous administration. Morale is low when training is low.

He says Obama’s pledge to give whatever training is needed signals ‘a new day’ in U.S.-Nigeria relations.

President Buhari orders the takeover of the security of Nigeria’s airspace over the Gulf of Guinea from Ghana, the first time in 70 years that the country will be managing its airspace.
The Ministry of Aviation says the country’s airspace is safe and had just recorded a score of over 90 percent by the International Civil Aviation:

We have a directive by the president to start the process of securing the management of Nigerian airspace over the Gulf of Guinea, which Ghana has been maintaining since 1945 and there is a move on the ground by Togo and Republic of Benin to take over the management of their own airspace from Ghana.

Buhari also directs the Ministry of Aviation to expedite action on the setting up of a new national carrier. Four state-of-the-art terminals are currently being constructed in Lagos, Kano, Port Harcourt and Enugu with a loan from China, and will be ready by the first quarter of 2016.

A member of the House of Representatives urges Buhari to negotiate with Boko Haram for the release of the abducted Chibok girls.

However, if it is about the Chibok girls, I support negotiating with Boko Haram. Life is precious. Anything that will bring the girls back is in order. Outside that, we should not negotiate with them. By the way who are we negotiating with? They have no agenda; nothing! They say they are anti book, yet they kill uneducated farmers. They say they are muslims, yet they kill Rasheeds and Ibrahims innocently selling goods at markets in the North East. Meanwhile, with Buhari who has deep background in military and security, I believe we will soon end them (Boko Haram). We also have to block corruption in the military.

The Centre for Crisis Communication says some elements of Boko Haram have reached out to the centre to facilitate dialogue with the federal government to end the insurgency in the country. The Center says that while the option of dialogue with the group is a hard sell, the window opened recently by President Buhari on the possibility of dialogue with genuine members of the terrorist group rekindled the hope for dialogue.

However the founder of Future Prowess Islamic Foundation, which takes care of hundreds of children, including those that lost their parents as a result of the Boko Haram crisis says several mistakes were made in the past and urged the government to trade softly.

We had phantom offers of dialogue in the past that did not yield any positive result and we must not complicate the issue any further. Government and our security forces must not give room for scammers. The real Boko Haram terrorists are in the hinterland; the way they operate is different. Yes, some members or foot soldiers of the Boko Haram may offer themselves available for dialogue but do they have the capacity to make any impact? Do they have the outreach to stop the mayhem we are experiencing? Do they have the ware withal to tell their members to lay down their arms? The answer is no. Our security agents must use their knowledge of intelligence to verify the identity of those that make the recent offer so that resources would not be wasted for a fruitless exercise.

Buhari says he’s accelerating plans for one of the world’s largest oil cleanups following 50 years of spillage at operations in the Ogoniland region of the Niger Delta. He approves the composition of a governing council and board of trustees to oversee the restoration plan. A group of ‘stakeholders’ will release as much as $10 million within 30 days of formally creating a trust fund to manage financial contributions, according to an e-mailed statement from the office of the presidency. The UN says the recovery would be the world’s ‘most wide-ranging and long-term oil cleanup’ lasting three decades and it will take an initial capital injection of $1 billion. The two organizations that will oversee the oil clean up will have representatives from the petroleum and environment ministries, the United Nations and the state-run oil company, according to the statement from Buhari’s office.

Senator Leahy, in a statement titled, Buhari’s Mis-Directed Criticism of the Leahy Law on Human Rights, says President Buhari should clean up military units allegedly implicated in atrocities in order to get more military support from US instead of rebuking the Leahy Law. He charges Buhari to direct his attention to and clean up the units implicated in such atrocities.

It is well documented by the State Department and by respected human rights organisations that Nigerian army personnel have, for many years, engaged in a pattern and practice of gross violations of human rights against the Nigerian people and others, including summary executions of prisoners, indiscriminate attacks against civilians, torture, forced disappearances and rape. Rarely have the perpetrators been prosecuted or punished. This abusive conduct not only violates the laws of war, it creates fear and loathing among the Nigerian people whose support is necessary to defeat a terrorist group like Boko Haram. President Buhari ignores the undisputed fact that most Nigerian army units have been approved, under the Leahy Law, for U.S. training and equipment. Only those particular units against which there is credible evidence of the most heinous crimes are ineligible for U.S. aid. And even those units can again become eligible if the Nigerian Government takes effective steps to bring the responsible individuals to justice.

I strongly agree with President Buhari about the need to defeat Boko Haram, and I have supported tens of millions of dollars in U.S. aid to Nigeria for that purpose. But rather than suggest that the United States is at fault for not funding murderers and rapists in the Nigerian military, he should face up to his own responsibility to effectively counter Boko Haram.

Buhari says the US Leahy Law, which prohibits the US Department of State and Department of Defence from providing military assistance to foreign military units that violate human rights, aids Boko Haram. He says that the blanket application of the Leahy Law by the US on the grounds of unproven allegations of human rights violations levelled against the Nigerian Armed forces denies the country access to appropriate strategic weapons to prosecute the war against the insurgents.

In the face of abduction of innocent school girls from their hostels, indiscriminate bombings of civilians in markets and places of worship, our forces have remained largely impotent because they do not possess the appropriate weapons and technology, which they could have had, had the so-called human rights violations not been an obstacle. Unwittingly, and I dare say, unintentionally, the application of the Leahy law amendment by the US government has aided and abetted the Boko Haram terrorist group in the prosecution of its extremist ideology and hate, the indiscriminate killings and maiming of civilians, in raping of women and girls, and in their other heinous crimes. I believe this is not the spirit of the Leahy Laws. I know the American people cannot support any group engaged in these crimes.

Buhari informs United States lawmakers that Nigeria cannot shift its anti-gay stance. Speaking at the joint session of U.S. Senate and House Committees on Foreign Affairs he says sodomy is against Nigeria’s law and abhorrent to its culture. The president’s special adviser:

The issue of gay marriage came up here yesterday, PMB was pointblank. Sodomy is against the law in Nigeria, and abhorrent to our culture. Talks shifted to another matter once PMB emphatically stated Nigeria’s stand on same sex marriage. The issue was not pushed,

Buhari alleges that 250,000 barrels of crude are being stolen every day, with the profits going into individual bank accounts. He tells an audience at the Nigerian Embassy in Washington that the United States and other countries are helping us to trace such accounts now.

We will ask that such accounts be frozen and prosecute the persons. The amount involved is mind-boggling. Some former ministers were selling about one million barrels per day. I assure you that we will trace and repatriate such money and use the documents to prosecute them. 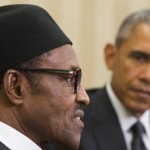 Obama welcomes Buhari to the Oval Office and praises him for working to bring safety, security and peace to a nation challenged by economic strains, a history of corruption and violence unleashed by the Islamic extremist group Boko Haram. Relations are now expected to improve under Buhari. Obama:

President Buhari dismisses all of his country’s top military officials, announcing the elevation of Maj. Gen. Buratai, currently the head of the multinational anti-Boko Haram force to army chief of staff.

President Buhari condemns the latest terrorist attacks by the Boko Haram terrorists describing them as enemies of everybody. He also vows to hunt down the militants to the last man. The President says he is deeply touched by these mindless incidents of violence on innocent people during the month of Ramadan.

Make no mistake about it: this government is ever determined to discharge its fundamental duty of protecting the lives of its citizens from physical threats from any groups bent on creating chaos, confusion, and on destroying social and economic life of the people.

Buhari is sworn in as Nigerian president in front of cheering crowds with a 21-gun salute.

Gen Buhari beats incumbent Jonathan by more than 2.5 million votes, to become the first opposition candidate to win a presidential election in Nigeria.

What's this? This is an unbiased just-the-facts news timeline ('newsline') about Muhammadu Buhari, created by Newslines contributors. Make it grow it by finding and summarising news. Learn more