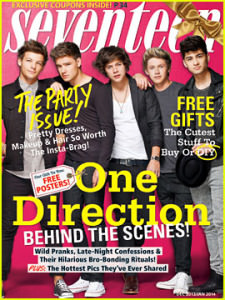 One Direction appears on the cover of the January 2014/December 2013 issue of Seventeen magazine. They talk about singing in the shower, who has the best abs, and how they keep things fun on the road. Louis says:

I’ve been labeled the prankster. I change the words of songs when the guys least expect it – their reactions are priceless.