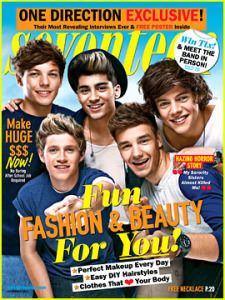 One Direction appears on the cover of the November 2012 issue of Seventeen magazine. They talk about Demi Lovato, Harry being girl crazy, and dealing with bullies. Liam says:

I was bullied by a few people who were much older than me. I went to camp to learn boxing. I was 12, and my coach was 24. I felt like if I could fight him, I could stand up to anyone.