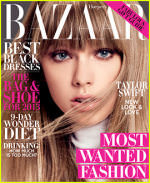 Swift appears on the cover of the December 2012/January 2013 issue of Harper’s Bazaar magazine. She talks about wearing dresses, dating, and the inspiration for her music.

Some combinations of people are toxic, you know? You have to find the right one that isn’t just going to explode into fiery ash and destruction. Despite all of that and how unpleasant it is, as a writer you get a lot from it. It’s a crazy justification system. You know that guy you really wish you could erase from your memory? But then the answer is track six, eight, 12, and 13.