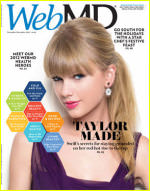 Swift appears on the cover of the November/December 2012 issue of WebMD magazine. She talks about being happy, relationships, and her album.