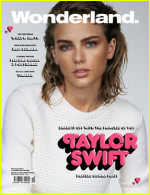 Swift appears on the cover of the November/December 2014 issue of Wonderland magazine. She talks about Twitter, being single, and having her album 1989 be a pop album.

This was sort of the final phase of the sonic evolution I feel I’ve been on for the last couple of years. I’ve been experimenting with pop sensibilities and then on my last record, I got attached to it. That’s the wonderful thing about trying as many different ways of writing music as possible – discoveries.