What's this? This is an unbiased just-the-facts news summary about Patrick Carney, The Black Keys, extracted from the original article by Newslines' contributors. To see the newsline of each topic, click the links below. Learn more 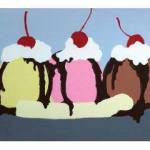 Drummer, a side-project founded by Carney of the Black Keys and featuring drummers from five Ohio-based bands, releases its first album. Carney plays bass on the album, saying:

For the most part, no one ever really wants to play drums, at least when you’re first getting into playing music. That’s how I started playing drums, for sure. It would be the last instrument someone wanted to play. In order to be in a band, you were forced to play drums.