What's this? This is an unbiased just-the-facts news summary about Zac Efron, extracted from the original article by Newslines' contributors. To see the newsline of each topic, click the links below. Learn more 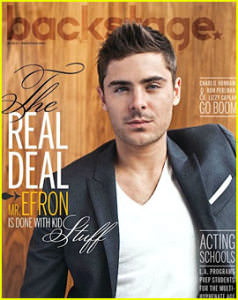 Efron appears on the cover of a October 2012 issue of Backstage magazine. He talks about what makes him work hard, his role in Paperboy, and taking a role in a franchise.

It’s not that I’m opposed to doing a big-budget action movie. But it has to be the right project. I don’t know that I’ve earned the right to hold a gun, if that makes sense. I need to pay my dues.