What's this? This is an unbiased just-the-facts news summary about Barack Obama, Benjamin Netanyahu, Israel, extracted from the original article by Newslines' contributors. To see the newsline of each topic, click the links below. Learn more 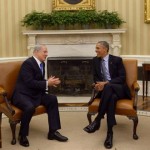 Minister Netanyahu meets with President Obama about the security of Israel. President Obama says that Israel’s security is a primary focus of his administration and he’s committed to using the resources of the United States to help keep Israel safe.

As I’ve said repeatedly, the security of Israel is one of my top foreign policy priorities and that has expressed itself not only in words but in deeds. We have closer military intelligence cooperation than any two administrations in history. The military assistance that we provide we consider not only an important part of our obligation to the security of the state of Israel but also an important part of US security infrastructure in the region as we make sure that one of our closest allies can not only protect itself but can also work with us in deterring terrorism and other security threats.

Prime Minister Netanyahu also expresses his appreciation of the strong bond that exists between the United States and Israel.