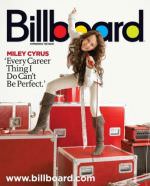 Cyrus appears on the cover of a July 2008 issue of Billboard magazine. She talks about her album Breakout and her semi-nude photo in Vanity Fair.

I was embarrassed, but also it’s like, every career thing that I do can’t be perfect, and sometimes my decisions are wrong. I think that just makes me even more relatable. I don’t think people will look at me any differently because they’re like, ‘You know what, I’m going to do stupid stuff too, and I’m going to make mistakes, and that’s fine.’ It still hurts when I think about it — but you know what, it doesn’t mean that you can’t move on.