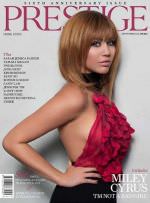 Cyrus appears on the cover of the September 2011 issue of Prestige Hong Kong magazine. She talks about whether she is a Southern or California girl and if she misses Hannah Montana.

No [laughs]. I miss the family vibe, but I don’t miss the routine at all. I was so bored doing the same thing every day. It’s a lot easier not being on a show, to live my life a little bit and do some of the others thing that I want to do, I don’t have to be back at a certain time. You’re not worrying about a cast schedule or what the producers are going to think. I’m so grateful that I was able to be on that show, but even my little sister, who’s 11, wants to go into acting. I just say, ‘Just wait, dude.’ Because the way you’re going to be when you’re my age and the way you are right now are so different. Don’t put yourself in a situation where people re going to think of you as only one thing.