In response to a fan’s Twitter question about McGregor:

@RandyOrton do you think you can whoop @TheNotoriousMMA ass if he transitioned to Wrestling in the WWE ?

Orton talks about CM Punk’s performance, while trolling McGregor, who he refers to as “Conor McDonald”.

I like making $. Over and over. Not once every 6 months….plus I'd prob fake punch the guy and get choked out. #lol https://t.co/xLXt01bzyf

Unless it was the Irish guy little person Connor Mcdonald

@RandyOrton could you beat Connor McGregor in a street fight?

Maybe we see if John Cena and Dean Ambrose can act as a team against the team of Kane, “The Viper” Randy Orton let’s put Seth Rollins in there as well.

Orton enters the Summerslam arena just after Bryan wins the WWE Championship from Cena to cash in his Money in the Bank title match contract. Triple H delivers a pedigree to Bryan allowing Orton to pin him and obtain the championship. 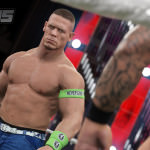 Cena and Orton are featured in first screenshot from WWE 2k15 gameplay. The shot shows Cena having a stare down with Orton in the ring.

Reigns will face Randy Orton at Summerslam on August 17th. The pair has been feuding over WWE title shots the past few weeks, now the two will meet in the ring.

Cena obtains the WWE World Heavyweight Championship in an eight man ladder match at WWE Money in the Bank. Cena grabs the title hanging above the ring for the victory at twenty-six minutes and thirty-five seconds.

Batista returns to WWE on Monday Night RAW to confront Orton before the Royal Rumble pay-per-view.

So I understand that you have some questions about my return. Let me make this as simple as possible and let me explain to you why I’m back. For that (pointing at the title belt). So whether it’s you or John Cena or someone else, I don’t care. I’m back to win the Royal Rumble match on Sunday, I’m back to be the WWE World Heavyweight Champion, and I am back to headline WrestleMania, so deal with it

Orton retains the WWE Championship at Survivor Series in singles competition against Big Show. Orton picks up the pinfall victory, following a distraction by Triple H, at eleven minutes and eight seconds.

Orton obtains the vacant WWE Championship by defeating Bryan in a Hell in a Cell match with Michaels as the special referee. Orton picks up the pinfall victory after Michaels super-kicks Bryan at twenty-two minutes and ten seconds.

Bryan obtains the WWE Championship at Night of Champions by defeating Orton in singles competition. Bryan picks up the pinfall victory due to a fast count by the referee (who was hit earlier in the match by Orton) at seventeen minutes and thirteen seconds.

Orton obtains the Money in the Bank contract briefcase to claim a shot at the WWE Championship anytime over the next year. Orton ascends a ladder and grabs the briefcase hanging above the ring for the victory at twenty-six minutes and thirty-four seconds.

Orton gets divorced from his wife of five years, Samantha. The pair have a four year old daughter together. Samantha gets full custody of their daughter and Randy is allowed visitation rights.

The SHIELD retain their WWE Tag Team Championships by defeating Bryan and Orton at Payback. Rollins picks up the pinfall victory over Bryan at twelve minutes and fourteen seconds.

Orton talks to Comcast about his future in WWE and the diva’s division.

I wouldn’t say I’m WWE for life, I’d say my near future will consist of me primarily being in the ring,” Orton said. “Wrestling is my first love. The movie was fun, but the schedule was grueling because I had to fly off on my off days to film. Eight weeks went by and I had three days off. If I do the movie thing, I’ll be sure that I’m only doing the movie so I can concentrate on it. (Laughs) I think I’d be more sane that way.

Swagger defeats Henry, Jericho, Orton, Bryan and Kane inside the Elimination Chamber to earn a shot at the World Heavyweight Championship at Wrestlemania 29. Swagger last eliminates Orton via pinfall to secure the victory.

Sheamus defeats Jericho, Del Rio and Orton in fatal four-way action at Over the Limit to retain the World Heavyweight Championship. Sheamus picks up the pinfall victory after hitting a White Noise slam on Jericho at fifteen minutes and fifty-three seconds.

Wrestlemania 28 is held at Sun Life Stadium in Miami, Florida. The event features Kane vs Randy Orton, Big Show vs Cody Rhodes, The Undertaker vs Triple H, CM Punk vs Chris Jericho and The Rock vs John Cena.

Wrestlemania 26 is held at The University of Phoenix Stadium in Glendale, Arizona. The event features Randy Orton vs Cody Rhodes vs Ted DiBiase, Triple H vs Sheamus, Rey Mysterio vs CM Punk, Bret Hart vs Vince McMahon, Chris Jericho vs Edge, John Cena vs Batista and The Undertaker vs Shawn Michaels in a retirement match.

Wrestlemania 25 is held the Reliant Stadium in Houston, Texas. The event is the 25th anniversary of the pay-per-view. The show features Matt Hardy vs Jeff Hardy, Chris Jericho vs WWE Legends Team, Rey Mysterio vs JBL, The Undertaker vs Shawn Michaels, John Cena vs Edge vs Big Show and Triple H vs Randy Orton. Mickey Rourke appears and punches Chris Jericho.

Jericho returns to WWE to interrupt Randy Orton’s ” passing of the torch” ceremony.

Wrestlemania 22 is held at the Allstate Arena in the Chicago suburb of Rosemont, Illinois. The event features Edge vs Mick Foley, Trish Stratus vs Mickie James, The Undertaker vs Mark Henry, Rey Mysterio vs Kurt Angle vs Randy Orton and John Cena vs Triple H

Wrestlemania 21 is held at the Staples Center in Los Angeles, California. The event features a 30 man battle royal, Rey Mysterio vs Eddie Guerrero, The Undertaker vs Randy Orton, Kurt Angle vs Shawn Michaels, John Cena vs JBL and Batista vs Triple H.

Orton begins training under the tutelage of his father, Bob Orton  at the Mid-Missouri Wrestling Association-Southern Illinois Conference Wrestling.

We had one ring in what was like an old, World War II ammunition factory – it was old, it was torn up, and it wasn’t up to code, that’s for sure. It wasn’t the best conditions, that’s for sure.

Orton is born in Knoxville, TN despite being billed from St. Louis, Mo during his wrestling career. He is the oldest of three siblings. Orton’s interest in wrestling develops while watching his father, Bob Orton throughout his childhood.

I have to put my father over because he really taught me a lot, especially when it comes to out-of-the-ring psychology and how to react when you’re approached by fans after a show or in the airport. It might sound silly, but a lot of those things come into play when you’re playing a character.

What's this? This is an unbiased just-the-facts news timeline ('newsline') about Randy Orton, created by Newslines' contributors. Help us grow it by finding and summarising news. Learn more