The annual reveal of Starbucks’ Christmas ‘red cup’ is stirring up some controversy. The annual cup has featured several winter-themed designs since it first appeared in 1997. This year’s holiday cup design is an ombre from bright red to dark cranberry.

While some Twitter users praise the minimalist design, others think the cups are a ‘war on Christmas.’ Starbucks maintains that their holiday cups are meant to be a blank canvas for customers to create their own stories, inspired by the doodles and designs that customers have drawn on their white cups for years.

In the past, we have told stories with our holiday cups designs. This year we wanted to usher in the holidays with a purity of design that welcomes all of our stories.

The New York Times and Starbucks announce that selected NY Times articles will be made free-of-charge to members of the Starbucks loyalty program via the Starbucks App beginning in early 2016. NYT CEO Thompson:

We have enjoyed a long and fruitful relationship with Starbucks and we’re delighted that this arrangement will further extend our digital relationship.

We see a future where the Starbucks retail experience seamlessly extends to the mobile devices our millions of customers carry with them every day. Our relationship with the New York Times is the perfect example of bringing this vision to life.

Starbucks moves water bottling for Ethos Water outside of California.

We are committed to our mission to be a globally responsible company and to support the people of the state of California as they face this unprecedented drought.

Kohr, a Raleigh police lieutenant, and his wife, are suing Starbucks for $50,000, including damages, attorney fees and medical costs. Kohr claims that a lid popped off the cup of coffee, and the cup folded in on itself. Kohr claims he poured cold water on the burn, but the pain intensified. He claims the injuries aggravated his Crohn’s disease and resulted in surgery to remove a portion of his intestine. The barista who prepared the drink and the company that made the cup have been dropped from the case. Before the case started, Starbucks attorneys argued that because Kohr had not actually paid for the coffee, he wasn’t eligible for a warranty. Jury selection has taken place and testimony in the case is expected to begin later this week.

Starbucks ends the “Race Together” aspect of its broader campaign on race, meaning that baristas will no longer be writing “Race Together” on customers’ cups. Baristas complained that they barely had enough time to complete orders and that they were never even trained about the campaign before it launched. Starbucks is still going ahead with other parts of the initiative, including forums to discuss race and the hiring of 10,000 employees from diverse backgrounds to staff new stores in poor, urban areas. Schultz:

While there has been criticism of the initiative — and I know this hasn’t been easy for any of you — let me assure you that we didn’t expect universal praise…The promise of the American Dream should be available to every person in this country, not just a select few.

Starbucks responds to Neil Young’s boycott of their products by denying that they are involved in a lawsuit against Vermont over new laws governing genetically engineered foods. Starbucks statement:

Starbucks is not a part of any lawsuit pertaining to GMO labeling nor have we provided funding for any campaign. And Starbucks is not aligned with Monsanto to stop food labeling or block Vermont State law. The petition claiming that Starbucks is part of this litigation is completely false and we have asked the petitioners to correct their description of our position.

Young boycotts Starbucks due to their involvement in a lawsuit by the Grocery Manufacturers Association, of which they are a member, against the state of Vermont’s new law that requires all foods containing GMO’s to be labeled as such.

I used to line up and get my latte everyday, but yesterday was my last one. Starbucks has teamed up with Monsanto to sue Vermont, and stop accurate food labeling. Monsanto might not care what we think — but as a public-facing company, Starbucks does. If we can generate enough attention, we can push Starbucks to withdraw its support for the lawsuit, and then pressure other companies to do the same.

We are looking to capitalize on the strength of drive-through stores, which make up about 40% of its U.S. company-operated stores and have higher sales growth than stores without drive-through service.

The trucks will be run by Aramark. In an Aramark survey of its college customers, 47 percent said they want to purchase something from a specialty coffee or espresso café, and Starbucks was the No. 1 preferred brand for coffee. Aramark:

A college campus was the ideal setting to test the mobile truck,

McDonald’s Japan says the Chinese supplier accused of selling expired beef and chicken had provided 20 percent of the meat for its chicken nuggets. McDonalds, Burger King and Starbucks have stopped using the supplier for beef and chicken. The supplier says:

Our company management believes this to be an isolated event, but takes full responsibility for the situation and will take appropriate actions swiftly and comprehensively. Allison Hills becomes the first barista accepted to ASU through the Starbucks College Achievement Plan. As a shift supervisor, she was one of the first to learn of the new college plan and applied for ASU as soon as she got home that afternoon. A few months later, she received her acceptance letter. Her mother says:

I always knew it was a good company, but now it’s directly changing our family in a personal way. Ali’s going to reach her goals and my dream for her is coming true. Imagine all the other families that are in our shoes. It’s absolutely amazing. 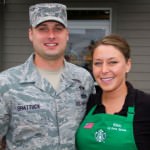 Starbucks rolls out aprons to its military-affiliated employees, featuring an American flag along with the employee’s name and military affiliation. The first aprons are handed out at a Starbucks near a large military base in Washington state. Aprons will be given out to Starbucks employees that are enrolled with “Roll Call” a website where partners can identify themselves as being affiliated with the military whether through service or marriage. The site is part of Starbucks commitment to hire 10,000 veterans and military spouses by the end of 2018.

This is a way to honor partners who served in the military and veterans’ spouses. We know the strength of the Siren when people are traveling the world. This extra identification on aprons will help create an even stronger relationship between our partners and customers who have a military connection.

Starbucks donates $50,000 to the Wounded Warrior Project – a nonprofit organization that provides assistance to men and women who incurred physical or mental injuries while serving in the military. For every specially marked Verismo System that was sold, $5 of the funds went to the Project.

There’s so much more that we can do. It feels good to know that we – along with our customers – are helping make a difference in the lives of military men and women with specific needs after their service.

The popular coffee chain begins offering artisanal grilled cheese sandwiches. The sandwiches are made with a blend of white cheddar, yellow cheddar and mozzarella on multi-grain bread and retails for $5.25. Starbucks raises a Gay Pride flag above their headquarters in Seattle that will remain throughout the Seattle Gay Pride Parade weekend. Anthony Hesseltine, a member of Starbucks Partner Pride Alliance Network:

Not everyone will approve of Starbucks flying the Pride flag. I don’t wish any harm by having the flag fly, but I do want people to reflect. The whole message is about diversity and accepting people for their differences. If you think about a rainbow, no one color is dominant. It’s a harmonization of different colors, each color contributing to the whole.

Starbucks announces that they will provide tuition reimbursement to Arizona State University’s online courses for interested employees. The requirements of the program are that the partner (employee) must work 20+ hours a week with Starbucks and must have the grades needed to be accepted into ASU. Employees are not being required to continue working with Starbucks after they graduate. CEO of Starbucks, Howard Schultz, says

I feel so strongly this is the right thing to do and Starbucks as a company is going to benefit in ways that probably we can not identify today.

The scholarship is being offered for those with at least two years of college credits, though Starbucks has said they will also be providing assistance for those freshly starting as well.

Starbucks and Duracell Powermat announce that they’ve begun a national rollout of wireless phone chargers in Starbucks and Teavana locations, starting in the San Franscisco Bay Area and featuring a special area on tables throughout the store where customers can place their cellular devices to be recharged. Daniel Schreiber, president of Powermat Technologies, said

This move by Starbucks cuts the final cord of our lives — the power cord. It’s changing the way humanity interacts with power.

Over the next three years, more than 100,000 table chargers — built-in Powermat charge pads — will be installed in Starbucks’ 7,500 company-owned stores in the U.S.

Starbucks opens the first Teavana Fine Teas + Tea Bar in New York City’s Upper East Side. What Starbucks is for coffee, this Teavana bar plans to be for tea. The tea bar features the renowned Teavana “Wall of Tea” as well as special pastries, salads and flatbreads sandwiches meant to specifically compliment the flavors of tea offered. Schultz, Starbucks chairman, president and chief executive officer:

Tea has been a part of Starbucks heritage since 1971, when we were founded as Starbucks Coffee, Tea and Spices, and this new store concept elevates the tea experience in the same way we’ve done for coffee. As the second most-consumed global beverage behind water, tea presents a $90 billion global market opportunity, and we are excited to celebrate the first retail example of how our two companies are coming together.

Gordon Bowke suggests the name “Pequod” for the developing coffee chain. This is a reference to Captain Ahab’s ship in Moby Dick. Co-founders Jerry Baldwin and Zev Siegl instead suggest the name “Starbucks” – after Captain Ahab’s first mate. Thus is the chain officially named. This name would later go on to inspire the iconic green and white Siren logo.