Ali’s funeral is held in Louisville, Kentucky. Muslim, Christian, Jewish and other speakers speak of his fight for civil rights, while a message from President Barack Obama praises his originality. His wife Lonnie:

If Muhammad didn’t like the rules, he rewrote them. His religion, his beliefs, his name were his to fashion, no matter what the cost. Muhammad wants young people of every background to see his life as proof that adversity can make you stronger. It cannot rob you of the power to dream, and to reach your dreams.

Lemmy’s funeral is held in Los Angeles with family and colleagues. The funeral features tributes by such luminaries as Slash, Dave Grohl, and Rob Halford. Fans were asked not to attend; a live stream was put on YouTube. A photograph of Motorhead was on display at the service chapel, together with a bank of speakers, Lemmy’s boots and an urn shaped like the singer’s trademark black brimmed hat. The band’s manager:

We all know he would not have stood for anything formal or sombre.

He wasn’t a religious man and praying for a miracle was something he would have viewed as a delusional act, but he was profoundly spiritual. Travel well, my dear father. You are back out on the road for a longest tour to the great gig in the sky.

Lemmy was somebody I just feel so honored to have been friends with. He lived his life the way he wanted to… his music and personality will last forever.

[He was] my hero… the one true rock ‘n’ roller…[He] set such a great example because he was so kind to everyone.

At the end of the service Lemmy’s bass guitar is plugged in to a stack of amplifiers and the volume turned up, with the congregation applauding as feedback from the speakers fills the chapel. Bobbi Kristina Brown is remembered in a private service. Her body is brought to the church three hours before the service to avoid paparazzi and onlookers. Four unidentified men act as pallbearers carrying her coffin into the church. Security is heavy at the church and escorting family to the church. Although private, dozens of cars arrive at the church with mourners who attend the memorial service. Almost 100 media and dozens of onlookers stand behind a police barracade waiting for the mourners to exit the church.

Family members bury Dawabsheh while his four-year-old brother and parents are being treated at an Israeli hospital for major burns, . Hundreds of mourners attend the funeral. 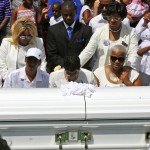 Hundreds of mourners gather at the suburban Chicago church that Bland attended for many of her 28 years. Relatives and friends recount happy memories of Bland’s faith and social activism, and restate their belief that her death in a Texas jail was not suicide. Bland’s mother:

That baby did not take herself out of here. Her purpose was to stop all injustice against blacks in the South.

Leaders at DuPage remember Bland as a smart woman who sang in the youth choir and participated in the church’s Girl Scout troop. Reverend:

Hundreds of mourners attend the funeral of Scott at W.O.R.D. Ministries Christian Center. With the 200 seat sanctuary full, 100 more attendees stand outside in the rain.  Soloist Brian McClain sings a gospel selection, and the pastor George Hamilton delivers the sermon. On the death of Scott, he says:

There is no doubt in my mind that Walter’s death was motivated by racism. You have to hate somebody to shoot them from behind. This hate could not have been because of the person who Walter was. This hate was because Walter was an African American.

South Carolina congressman Clyburn addresses the press after the funeral:

I think this is a catalyst to get people to face up to the fact that we’ve got problems in this country. I think this exposed something that is already there.

Us Weekly reports there will be a crimson carpet for guests to walk before paying their final respects to Rivers during her Sunday funeral. The carpeting outside the Temple Emanu-El on the East Side will be buried with Rivers. Rivers is known for making fashion critiques of celebrities on red carpet Hollywood events.

Melissa Rivers spent 90 minutes inside the Frank E. Campbell Funeral Home on Friday working on the final arrangements. When asked how she is doing:

St. Louis’ Friendly Temple Missionary Baptist Church is packed with attendees as relatives and close friends give their final goodbyes to Brown. Many mourners crowd outside to remember the life of the slain teenager. Brown’s cousins urge citizens to push for change at their local polls to end killings. 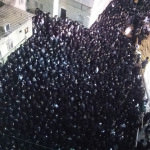 Thousands of ultra-Orthodox Jews line the streets to mourn 29-year-old Rabbi Avraham Walles of the Mea Shearim neighbourhood of Jerusalem after he is killed in an apparent terror attack by an excavator at a construction site where he is working as a religious instructor. He is survived by his wife and five children.

Cobb County jail officials announce that Harris will not be allowed to attend his 22-month-old son’s funeral. Jail policy states that Harris must be kept locked up without bond.

We do not transport inmates to funeral services. That’s it. That’s our policy.

Jobs is remembered by a small gathering of close friends and family attending at the Campus of Stanford Universities Memorial Church.  Among the guests present are Bill Clinton, Bill Gates and Joan Baez. California Gov. Jerry Brown declares the day to be Steve Jobs Day in the state of California and went on to say.

His innovations transformed an industry, and the products he conceived and shepherded to market have changed the way the entire world communicates. Steve Jobs embodied the California dream.

Aaliyah’s white casket is transported by a horse drawn, white carriage from Campbell Funeral Home to St. Ignatius Church. Dash and other celebrities walk behind the carriage. Tons of fans crowded the streets to pay their respects. Jay-Z, P. Diddy, Busta Rhymes, and Timbaland are among the many mourners. Timbaland: The public funeral starts at 9:08 am in London, when the tenor bell sounds to signal the departure of the cortege from Kensington Palace. Diana’s coffin is carried from the palace on a gun carriage, along Hyde Park to St. James’ Palace.  The official ceremony is held at Westminster Abbey, with 2000 people attending,  and finishes at the resting place in Althorp. A Palace spokeswoman says: Although there is no lying in state, obviously we want to ensure that as many of the public who wish to can share in the grieving.

Two thousand people attend the ceremony in Westminster Abbey. As the hearse drove the 77 miles to Diana’s final resting place, so many people threw flowers onto the car that the driver uses his windscreen wipers to keep a clear view.

I stand before you today the representative of a family in grief, in a country in mourning before a world in shock…We, your blood family, will do all we can to continue the imaginative way in which you were steering these two exceptional young men so that their souls are not simply immersed by duty and tradition but can sing openly as you planned.

Elton John sings a revamped version of his 1974 hit Candle In the Wind, which was originally written as a tribute to Marilyn Monroe. The song begins with the line “Goodbye, England’s rose, may you ever grow in our hearts.”