Denmark announces plans to demand refugees’ valuables in an attempt to make Denmark less appealing as a place of refuge. The rule is not different from laws that apply to Danes receiving welfare benefits, but lawmakers supporting the bill admit that the goal is to discourage people seeking asylum in Denmark. 20,000 people applied for asylum in Denmark in 2015, compared with 1.1 million in neighboring Germany and 163,000 in neighboring Sweden. Immigration Minister:

The Obama administration announces plans to halt new coal mining leases on federal land until it completes a review of fees. The administration wants to ensure that those fees secure a fair price for the mining rights and that the fees charged reflect the environmental costs of coal mining and use. Coal mining companies at present pay a $3 fee for each acre of federal land leased and a royalty on the sale price of strip-mined coal. The rate was set in 1976. 40% of coal mined in the US is mined on federal land.

Starting in 2017, graduates from Pueblo County, CO, high schools can be eligible to receive a scholarship funded by the states marijuana tax. With 60% of the county voting in favor, growers should be expecting to pay 5% more in taxes by 2020. These taxes are expected to generate $3.5 million in taxes, half of which will go towards funding towards scholarships. Pueblo County spokesperson:

The whole point of the scholarship program was to make higher education a reality for families who can’t afford to send their kids to school because of debt. 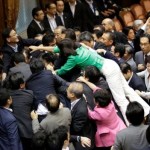 As a result of the disclosures in videos about the donation fo fetal tissue from abortions, Senator Paul introduces legislation that Majority Leader McConnell aims to vote on that halts federal funding to Planned Parenthood. The organizations receives about $500 million annually in federal funding, although that money cannot be used for abortions. Spokesperson for McConnell:

A panel appointed by Cuomo recommends a $15 an hour minimum raise from the current minimum of $8.75. The first wage increase should come by Dec. 31, taking the minimum in the city to $10.50 and in the rest of the state to $9.75. The wage in the city would then rise in increments of $1.50 annually for the next three years, until it reaches $15 at the end of 2018. In the rest of the state, the hourly wage would rise each year, reaching $15 on July 1, 2021. The mandate will apply to all workers in fast-food restaurants that are part of chains with at least 30 outlets.

The House of Representatives pass the “21st Century Cures Act” which increases research funding through the National Institutes of Health (NIH) by $9 billion over the next five years. The bill also provides $550 million over the next 5 years to expedite the discovery and approval of drugs by the Federal Food and Drug Administration (FDA). The bill also adds provisions to give drug companies more time to market drugs and increase the efficiency of collecting patient input. Some researchers and consumer advocates say the bill includes provisions that cuts corners in the drug approval process that undermine patient safety. Critics:

Some aspects of the bill could indeed enhance the development of and access to new drugs. Embedded in the language of the 21st Century Cures Act are some good ideas that could streamline the development and evaluation of new drugs and devices; its call for increased NIH funding may prove to be its most useful component. But political forces have also introduced other provisions that could lead to the approval of drugs and devices that are less safe or effective than existing criteria would permit

A ZIP code should never prevent any person from reaching their aspirations. The fact is that federal efforts have often fallen short. We’re approaching this in a very collaborative spirit. Enforcement is always a last resort — it is there, it is possible, but our preference is to work cooperatively and steadfastly with communities.

A proposal by Rep. Huffman to add language to block the Park Service, which maintains 14 national cemeteries, most of which contain graves of Civil War soldiers, from allowing private groups to decorate the graves of Southern soldiers with Confederate flags in states that commemorate Confederate Memorial Day, is passed by voice vote. The Andersonville and Vicksburg cemeteries in Georgia and Mississippi are affected. Huffman:

The American Civil War was fought, in Abraham Lincoln’s words, to ‘save the last best hope of Earth. We can honor that history without celebrating the Confederate flag and all of the dreadful things that it symbolizes.

I strongly oppose the inclusion of this amendment, which was slipped into the bill in the dead of night with no debate. Congress cannot simply rewrite history and strip the Confederate flag from existence. Members of Congress from New York and California cannot wipe away 150 years of Southern history with sleight-of-hand tactics.

The Park Service funding bill is scheduled for a vote July 9.

NYC police are upset over several police reform measures City Council members plan to review, including bills that would force cops to get suspects’ consent for searches, imprison police for using chokeholds, and require cops to give out the Civilian Complaint Review Board’s phone number. Police Benevolent Association:

These pieces of legislation have been proposed by individuals who have neither the expertise nor the experience to establish policy in the dangerous business of fighting crime. Policing policies must be left to the police management who understand the intricacies and difficulties of complex legal issues and the appropriate use of crime-fighting tactics.

Sanders introduces a bill that would eliminate undergraduate tuition. His College for All Act would eliminate the $70 billion dollar tuition costs at all 4-year public colleges and universities. Under the plan, the Federal Government would cover 67% — $47 billion dollars each year — of the costs, with states required to produce the remaining 33% ($23 billion). The bill plans to cover these costs by initiating a “Robin Hood Tax” on Wall Street. A .5% speculation fee will be charged on investment houses, hedge funds, and other stock trades. Additionally, a .1% fee will be charged on bonds, and a .005% fee will be charged on derivatives.

Lee introduces House Concurrent Resolution 29, a resolution which warns that because of the conflict and instability that global warming will create, women will be forced into prostitution in order to obtain enough food and clean water for their families. Excerpt:

Women will disproportionately face harmful impacts from climate change. Food insecure women with limited socioeconomic resources may be vulnerable to situations such as sex work, transactional sex, and early marriage that put them at risk for HIV, STIs, unplanned pregnancy, and poor reproductive health.

Walker plans to reduce the $137 million state deficit by requiring state employees to contribute 5.8% to their pensions and 12.6% to their health care, and forbidding them to negotiate for anything but their wages. If the budget isn’t cut then 6,000 state employees will be laid off and more than 200,000 children will be removed from the Medicaid program. Democrats and unions oppose the plan. A union director:

Even if you don’t like unions, surely we all can agree that anti-freedom attacks that deny public employees the right to negotiate a fair contract . . . are outrageous and wrong.

In a speech marking Heroes Day — celebrating victory over the old white regime — Mugabe gives a stern warning to white farmers that his government will stick to its policy of removing them from their land. Nearly 3,000 farmers have been told to leave their properties, although only 500 have left so far. Those who remain could be fined and jailed for up to two years for ignoring the eviction order. Mugabe says the August deadline will  allow new owners of the land enough time to prepare and plant for the new crop season in October.

We set ourselves an August deadline for the redistribution of land and that deadline stands. All genuine and well-meaning white farmers who wish to pursue a farming career as loyal citizens of this country have land to do so, no farmer need go without land.

He also rejects allegations that international food aid has been diverted away from opposition supporters to his own followers.

We shall feed all. Even the stooges and puppets will have enough. No Zimbabwean should die of hunger.