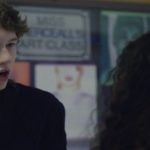 Selena Gomez continues her habit of incorporating Taylor Swift cameos into her work. An eagle-eyed fan notices that the cover of Taylor Swift’s multiplatinum album 1989 appears in the background of a shot in 13 Reasons Why’s tenth episode (Sheri’s tape). It appears someone drew the album cover as a project for an art class, and the teacher put it on display in the hallway. 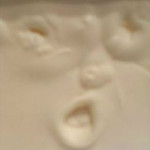 This was pretty much before I had coffee, so I was easily amused. I needed to put on my glasses to make sure it was him.

She considers posting the butter to Ebay and donating the funds to Hillary Clinton, but eats it instead.

It was the only butter I had, so I had to make the sacrifice.

Williams is slated to guest star in an upcoming episode of Doctor Who.

I’m so excited to be working on Doctor Who, as it’s such a big and important part of British culture. I can’t wait to meet the cast and crew and start filming, especially as we’ll be shooting not too far from my home town.

We’re thrilled to have Maisie Williams joining us on Doctor Who. It’s not possible to say too much about who or what she’s playing, but she is going to challenge the Doctor in very unexpected ways. This time he might just be out of his depth, and we know Maisie is going to give him exactly the right sort of hell.

South Park lampoons the recent Cosby sexual assault scandal on its holiday episode. The episode features Cosby and Taylor Swift singing a duet of Baby, It’s Cold Outside during which Cosby hands Swift a drink saying “That’s just some J-E-L-L-O”. The scene ends with Cosby coming on to Swift.

Carter appears as one of three judges of the $400,000 Pressure Cooker Contest during Forbes Under 30 Summit in Philadelphia. The winners are a team called Enrou, with “an online conscious marketplace for the conscious consumer to find products created in developing countries all around the world”.

Rossdale and Stefani work together on The Voice, with Stefani co-hosting and Rossdale helping to mentor aspiring singers.

Sting shows up at WWE’s comic-con panel in full makeup and costume. The wrestler’s status with the company has been unknown until now. Sting’s appearance confirms he is under some working deal with the company. The wrestler will also be featured in the WWE 2K15 video game and WWE’s next line of action figures.

SUKI Films announces principal photography has started on ESC in Sudbury, Ontario. The film is due for release in theaters and over other platforms in summer 2015. It is directed by Alain DesRochers and stars Molly Parker (House of Cards, The Firm), Nick Krause (The Descendants, Parenthood) and Juliette Gosselin (Les Jeunes Loups, Martyrs). McAfee provides off-screen narration as the computer voice.

Yeah, he just kind of said like dad stuff. [Laughs] He’s really supportive and he would say like, ‘You just got to breathe and be super honest and tell the truth and take risks and just have so much fun.’ And that was kind of it. I’d ask him for advice sometimes, but he also understood that I wanted to figure a lot of it out on my own, because that’s kind of just my style.

Duff guest stars on NBC comedy Community, playingMeghan, a mean girl who insults the main characters Britta, Shirley and Annie, but is taken down by character Abed played by Danny Pudi.

I think that it was fun for me to get to play a mean girl because it is so different than anything I’ve ever done before. But she is like – it was fun to play a character that’s super – acts super confident but is totally, you know, shallow and scared inside.

A Bieber event at a Roosevelt Field Mall in Garden City, NY, ends with five people sent to the hospital for minor injuries and one arrest after fans become unruly. James Roppo of Island/Def Jam Records is charged with “endangering the welfare of children and obstructing governmental administration” for not sending a Twitter message asking the 3000 fans to leave. Bieber’s team cancels the event and he posts a Twitter message to fans, saying that the police would not allow him access to the mall, and they had threatened to arrest him if the singer did not leave. Island Records apologizes in a written statement.

Conrad is a guest judge on cycle 13 of America’s Next Top Model. Conrad is only signed on the judges panel for one show in the contest series and said she might considered hosting a show of her own in the future.

I wouldn’t do a show like The Hills. Nothing with my personal life, but possibly something hosting. I think I have a little bit of time to figure out what I’m going to do next.

Conrad wins $50,000 while guest starting as a contestant on Who Wants To Be A Millionaire. Conrad will give all of her winnings to her charity of choice, m.powerment by mark, an organization working against domestic violence. Conrad had to answer one question to win the $50,000 and says she knew the answer, but used her lifeline anyway. 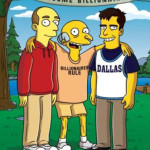 The Burns and the Bees, the eighth episode of The Simpsons‘ 20th season, airs on Fox TV, with Cuban as a guest star.

Montgomery Burns attends his annual billionaire retreat and wins control of the Austin Celtics from the show’s Texas oil tycoon in a poker game. After meeting Cuban, Burns tries to win over fans with his own antics.

Conrad stars in feature film Epic Movie. Conrad plays a satirical version of herself in the film with co-star Carmen Electra.

I don’t want to act. I tried it. … I don’t enjoy it, and I can’t make a career out of something I don’t really like. It’s not that fun, and I’m not that good at it.

Hanks plays a disgruntled former classmate of the Fonz, with a taste for martial arts on the A Little Case of Revenge episode of Happy Days.